Having found our position at the very front of the ship, we were determined to stand guard, watching intently at each and every aspect of the going through the locks whilst crossing the Panama Canal. We weren’t disappointed, it was AMAZING! 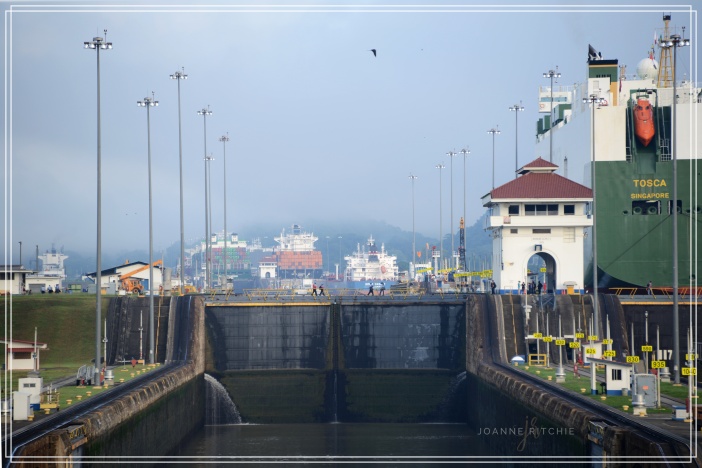 Over this summer vacation I’m taking trips of another kind. Of a Thursday I’m traveling down memory lane, reminiscing a little about all the traveling we’ve done to various parts of the world as a family!

In preparation of our crossing the Panama Canal, we were up on the front deck by 6am armed with both children and champagne. Alas, the HUMIDITY changed our plans with both these things as you can see from this hazy photo. 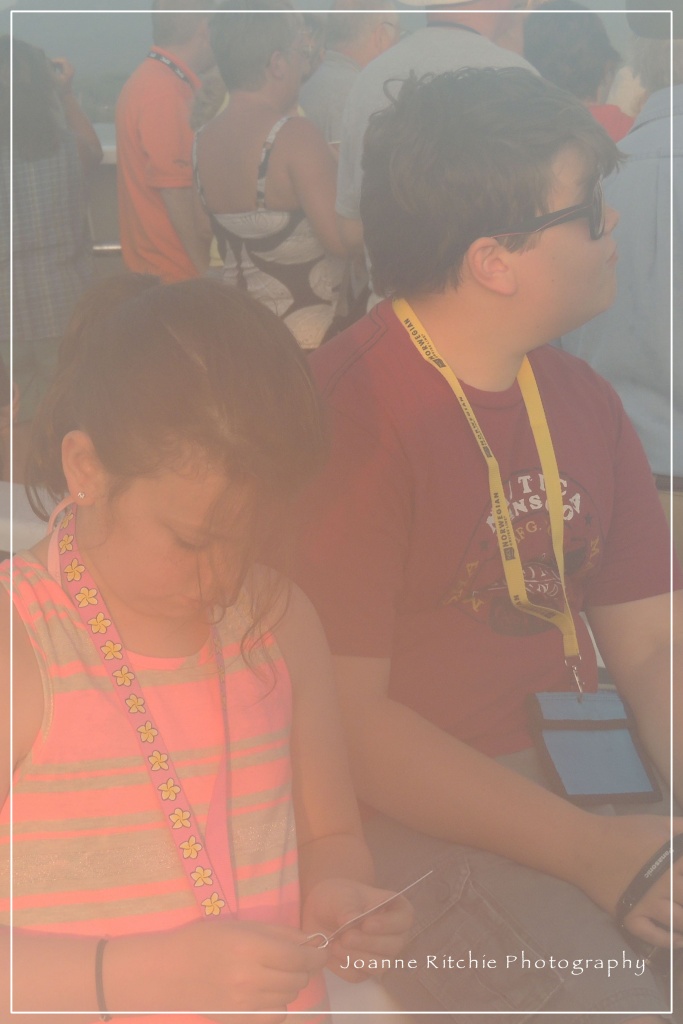 My camera, much like the children, was not responding well to the heat. Even the official photographer was experiencing the same problem which, although bad for her, made me feel a little better to know it wasn’t something I was doing.

As for the champagne and children, the champagne we put back on ice and drank that evening whilst the children, well… they lasted until the scheduled time we were meant to do our first crossing and when that didn’t happen and wasn’t going to happen anytime soon, they left.

When crossing the Panama Canal, one thing you can be assured of seeing is plenty of sea CONTAINERS!

Hence it came as no surprise when we docked at Cartagena, Columbia to see many of these containers along-side us. 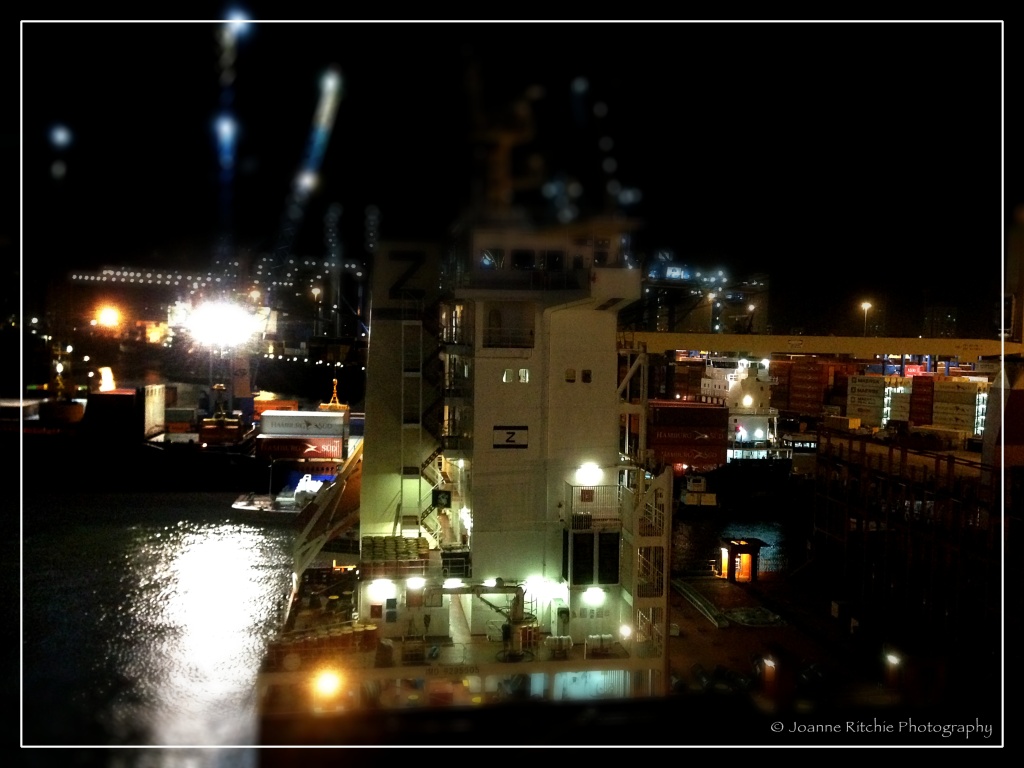 These containers were continually being loaded and unloaded. There was no time to even be considering… “mum, how much longer?”

The Bridge of the Americas is one of the few bridges that joins North to South America. Before beginning ones journey down the Panama Canal from the west coast, this enormous structure can be seen from miles away.

But like all bridges, it’s whats underneath that I find interesting.

The remnants of what I assume was once an old dock stood stoically in the morning sun, like a sentry watching over passing travelers.

This bridge itself has stood tall for over 50 years, this dock perhaps twice as long but… “mum, how much longer?”

This morning I was awake before sunrise I was so excited about crossing the Panama Canal. This is such a HUGE bucket list item ticked off my list.

The four of us headed up to the bow of the ship just after 6am to watch the passing of the first lock. Even at that early hour it was HOT, and I do mean hot but that wasn’t going to deter my crossing viewing, especially with Panama City looming on the horizon.

After passing under Panama’s bridge we knew our true adventure wasn’t far away! 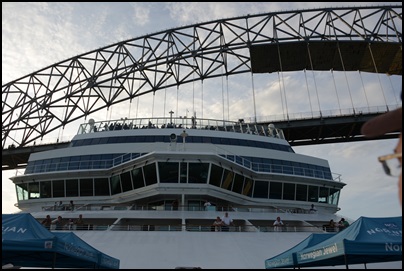 Then it was time for the first of what was going to be three locks we passed through today. The entire process was amazing how on either side of the ship four locomotives (like the one below) were keeping cables attached to the ship taunt to help the ship remain steady and in place as we sailed into place to await the lock filling with water. 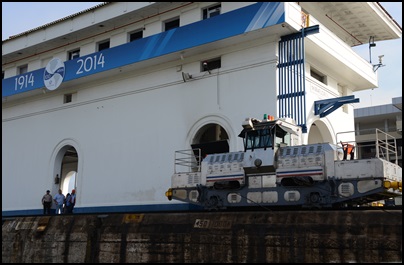 There were ships both behind us and in front of us crossing with us. The efficiency as to how quickly we all took our turns was incredible when you see how narrow each lock is. 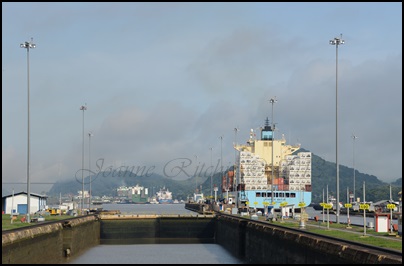 There really is between only 20 or 30 centimeters either side of the ships. Hence the necessity to keep the ships as stationary as possible in the locks. 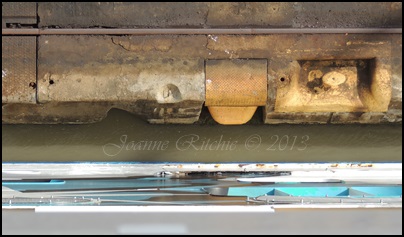 Sailing into Miraflores Lock was like nothing else we’d ever experienced. That’s Hubby and I circled in red watching diligently from the bow! 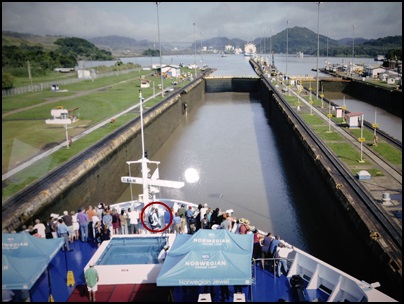 The gates had me mesmerized. How could these structures in all honesty work so quickly and hold so much water?! 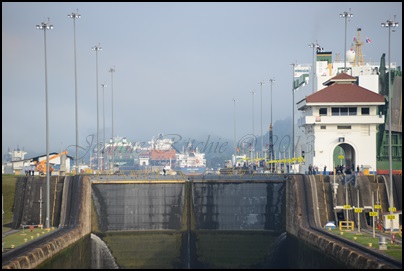 The locks filled up extraordinarily quickly. 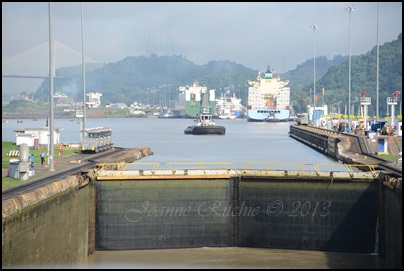 I honestly couldn’t keep my eyes from these gates. Knowing how old they were also had me intrigued! 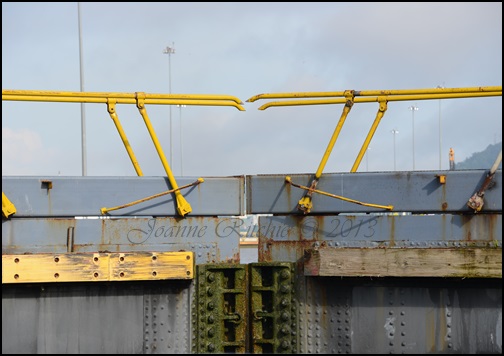 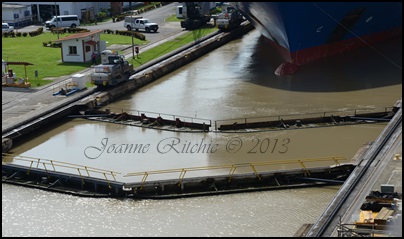 From our vantage point, we were determined not to miss a single thing! One quickly forgets how big the ship actually is until looking at it from this direction. Once again, that’s Hubby and I circled in red! 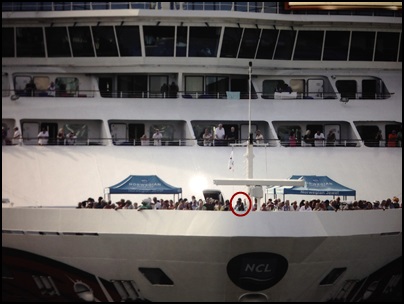 All in all I think we stayed at the bow for three hours that morning, even suffering a mild case of heat stroke, but it was SO worth it as I think our grins can attest to! 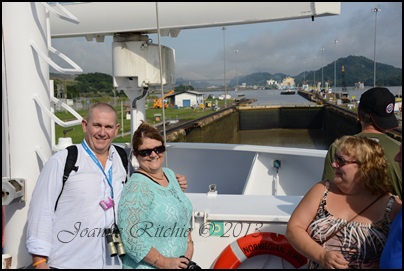 The children I’d like to say lasted an hour at the bow but I fear I could be exaggerating. For them the sanctuary of the cabin was far more enjoyable. 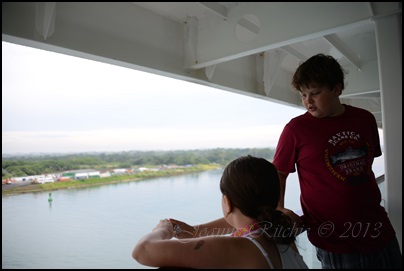 I remember when, as a family many years ago, we were watching a series on television about the seven great engineering feats of the world where the Panama Canal was one of them. It was at that moment all four of us vowed that one day we would cross it. We hadn’t realized at the time it would be quite so soon – what an incredible experience!