This week’s makeover challenge from Lucile’s Photo101 Rehab Clinic is a movie poster of… The Cabin in the Woods. Word on the street is that it’s a horror movies, not really my thing but with Chris Hemsworth in it, I may just have to watch it!

This was the final kick I needed for me to get into Lightroom as I had the perfect photo for this challenge but there were power lines EVERYWHERE, something my current program simply couldn’t deal with. Hence this is what I had to use… 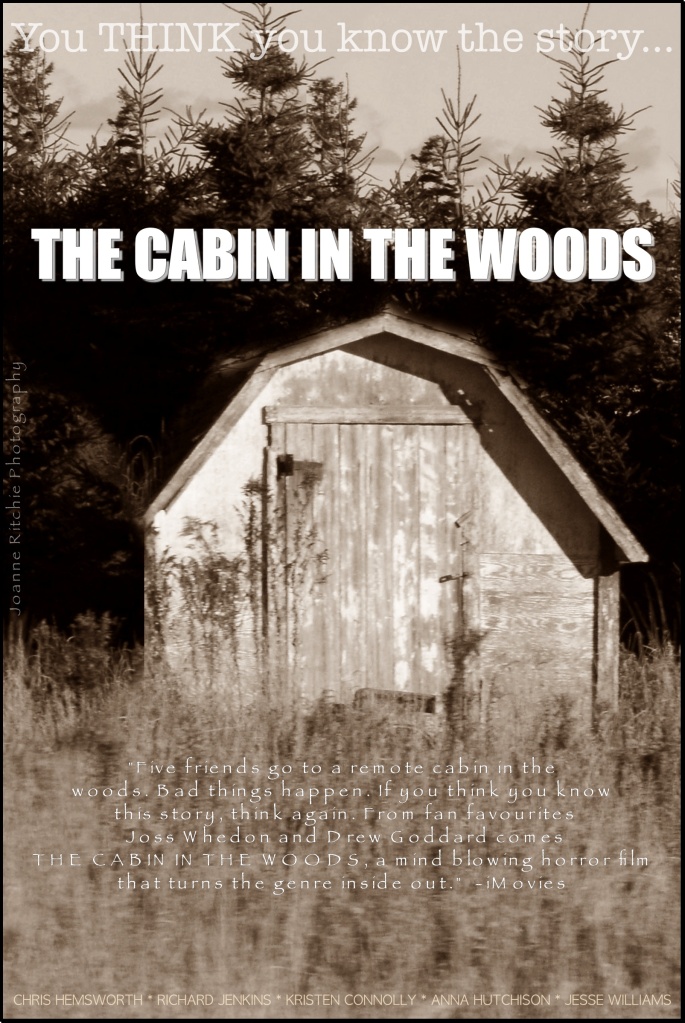 It’s not what I pictured in my mind but I’m still kinda happy with it. At the end of the day, if the “not-quite-right-photograph” is the worst thing that happens to me given all that’s happening in the world, seriously, I’m doin’ okay!

Once again the clock is ticking and I’ve more than likely missed the deadline for this week’s PhotoRehab Cover Makeover but it was one of those things I just had to do regardless. A book jacket “do-over“… LOVE THEM!!!

When I first read this week’s challenge I knew exactly what I wanted to do; it was just a case of trawling through my archive to find exactly what I needed.

Always SO much easier said then done as I become so easily side-tracked when going through memory lane!

Having heard the weather warnings for America’s east-coast on Monday morning, it was no surprise by day’s end the east-coast of Canada was also being included.

Blizzards hit Prince Edward Island Tuesday and are expected to hit again Saturday just as the clean-up from the first blizzard is completed.

It’s so hard to imagine what this tiny province is going through right now as I look back at our photo from last October of Northumberland Strait, the expanse of water between Prince Edward Island and New Brunswick.

Oddly, we were expecting the current weather conditions then, not the beautiful clear skies that were bestowed upon for the 24 hours we visited the island.

Not that I wish blizzards upon us here but one or two TRILLION snowflakes wouldn’t go astray. Please… “mum, how much longer?”

When planning our holiday to Eastern Canada we were torn between visiting Prince Edward Island (PEI) and New Brunswick, when a friend mentioned they would go back to PEI if only to cross Confederation Bridge.

Hmmm, the wheels began turning, a tad more googling and voila. Guess what we were crossing for a meal of fresh lobster?!

If we were in any doubt as to whether or not we were approaching the bridge, the signs certainly were there to let us to know we were getting close, lol! 🙂

The lobster, or ANY of the seafood for that matter, did NOT disappoint and after spending the night at a quaint B&B in Charlottetown, we headed back to Moncton Airport, New Brunswick the only way we could… VIA Confederation Bridge.

Confederation Bridge opened back in May 1997, replacing the existing ferry service between the provinces of Prince Edward Island and New Brunswick. This 8 mile long curved bridge is the longest in the world crossing ice-covered water.

Now, as to when we’ll be going back for that delightfully sweet lobster… “mum, how much longer?”

Driving from Moncton, New Brunswick to Charlottetown, Prince Edward Island last month it at times felt like we were driving through the English countryside.

With church spires appearing like periscopes above the tree-tops combined with the leaves in their autumn colors, it was easy to think back to another time driving through England.

This was the first time we’d ever had a GSP in the car and there’s no denying, it was rather fabulous. Especially as Siri like to update us as to how long to our destination.

Certainly alleviated the need of such questions as…  “mum, how much longer?”